The Dear Chase was on Saturday, August 15th. Tom, Glen and I showed in hopes to show off our single track skills, well that is the skills of Tom and Glen, not so much mine. It started out as a hot humid day and ended with good results race results. Here it is in a nutshell. 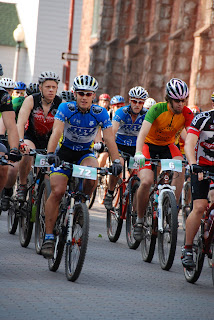 A good bunch of racers showed up including Jeff Adamcik, Anikin Nikolai, Aaron Swanson, Paul Belknap, among others. The roll out was a bit different this year with a little more road and up hills to split the field before the dirt track. Tom and I were on geared bikes and Glen was on a single speed. The plan was for me to set the pace as high as possible to the single track and let Tom set tempo through the single track. It worked and split the field to 4 of us. Note: Glen stuck with us to just about the single track which was super impressive being on a SS. We entered the single track with myself, Tom, Aaron, and Nikolai. Although Tom feels he was a bit off on the single track he set an awesome tempo keeping the each of us pounding the pedals. The tempo paced us and we had over a minute on the next guy going into lap two. Then the racing games started. Tom continued tempo in the single track and no one really wanted to keep that going on the two track. It cost us our split and with about 5 miles let Paul caught us on his SS. He knew he could not beat us on his SS letting us set tempo so he got on front and put in a hard effort. That effort struck an attack from Anikin splitting the 5 of us just ever so slightly. With about a mile left Tom and I worked as hard as we could to catch the attack but missed it by 15 or so seconds. Tom placed 4th and I place right behind him 5th. Tom was awesome in the single track and I would of done anything to give him a win that day, he deserved it. So it was a bit disappointing for us considering our team did a lot of the work and didn't get podium but a good race at that. Glen had a good day on the SS holding the lead for a bit but the strong effort in the beginning called the end to him down the finish. He placed 19th overall and 6th in SS. 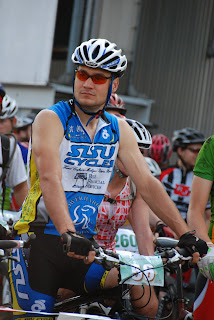 Posted by Culvers Racing at 9:23 AM