#2 Al Quaal
6 SISU Riders took to the starting line in Ishpeming including Gauthier, Bell, Carpenter, Hill, Lerlie, and Palomaki.
In the A race, Tyler Jenema, who put on a clinic at the first race, looked strong as he led through the first laps. He led a small group of Juntti and Gauthier to a early small lead. This was until Jeff Juntti, determined to give Jenema and the rest of the group a race for their money, eventually overtaking a solo lead. Jesse Bell and visiting Paul Belknap, riding a more conservative pace, gradually motored up to a fading riders. Paul eventually passed Jenema to overtake 2nd place. Bell and Gauthier formed a chase group for the last few laps helping each other pull closer and closer to the leaders, to no avail. Juntti rolled in solo for 1st, Belknap 2nd, Jenema 3rd, Gauthier 4th, and Bell 5th. As the action formed in the front of the race Palomaki stayed consistent and road a solid race finishing 8th. Danny's bike didn't quite hold up, he broke a hood early and could never recover finishing 17th and Lerlie enjoyed the day on the bike finishing 20th. 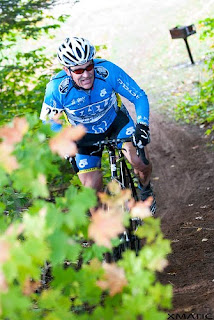 #3 Fit Strip
The snow that had, earlier in the week, threatened to blanket the Fit Strip with white for Race #3 on the UPCROSS calendar stayed to the west, instead covering the Keweenaw - perhaps foreshadowing the weather of the upcoming Keweenaw Cup.
The A race was tight from start to finish. The course was set up fast encouraging a group break away and midway through the 50-minute (8-lap) race, an octet established a healthy lead: Tyler Gauthier (Sisu Cycles), David Grant (Chocolay Ace), Tyler Jenema (Priority Health), Ron Williams, Dan Dehlin, Evan Simula, Jesse Bell (Sisu Cycles) and Joey Graci (Quiznos). As the race wore on and fatigue set in, the size of the lead pack slowly deteriorated. Another factor in the race was a log placed conveniently by race designer Dave Grant across the trail making the riders choose one of two options, bunny hop or dismount. Some hopped and some dismounted but most all had problems. Whether it was the dismount that caused a gap between riders, the bunny hop that caused mechanical, or the extra inch it would jump up as toes repeatably caught the edge it definitely was a factor. In the end, an elite group rode the final quarter mile of pavement neck and neck in what was to be a 4-up sprint. SISU rider Tyler Gauthier took his first UPCROSS win just ahead of an ecstatic David Grant, who also marked his best UPCROSS finish ever. Tyler Jenema, able to take over the lead in the UPCROSS standings, finished third, just a tenth of a second behind Grant. Ron Williams missed his chance at a podium finish by a second. Despite the mechanical Bell finished in a respectable 7th. Danny found himself spinning the whole race as he ran the single speed and chose the wrong gearing, finished 18th. 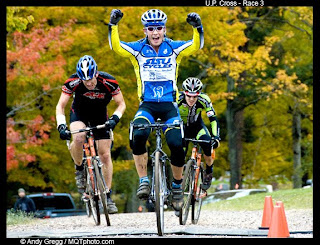 Check out the new feature from the boys at superiortiming.com. They got it going on! 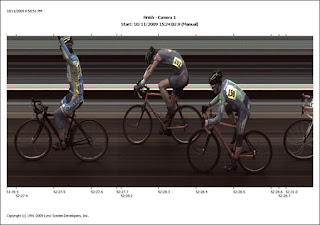