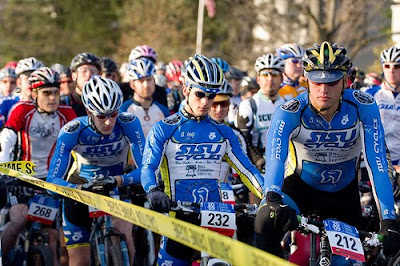 The funny thing about this picture is I didn't know they were behind me. I was in the front row on the line just focusing on the start.... apparently they were too haha. The gun sounded and I was off and surprised how slow the group was going for a start. Maybe I've been doing to many cross races with the pros because I felt it just wasn't fast enough to make my head spin and legs scream so I took the whole shot pretty much from the start. My pull was probably for a good mile or so until I decided to let someone else pull a little and sit in and recover. Jesse Bell took over with the pace making and I followed 3rd wheel until right before the first section of dirt. Two guys attacked on both sides and turned up the pace a notch for about 20 more yards. This is where my great start was wasted as the two guys who attacked bumped each other and caused my buddy Matt to crash right in front of me! Needless to say I was not too happy and left running down the middle of the trail trying to get my chain back on going from 1st to 100th place after 5 minutes of racing.
The rest of my race was spent trying to make up the lost places. This is where the shoulda coulda woulda took over in my head as I drilled it for the next 20 miles. Somewhere around Williamsburg road I knew I was getting close to the front of the race and could see little groups not far up the trail. I tried with everything I had to bridge the last couple gaps to the groups but found the match book running out of matches. The fuel tank levels were dropping fast and the chase ended with 6 miles to go and turned into salvage mode. My goal of 1:45 was falling by the wayside and as the miles ticked by slower and slower so did the goal. 1st twice or 11th in my age group was the final result. Overall I'm still pretty happy because I knew I felt as good as I have racing in a long time and I was able to almost get back to the front. I may have over done it in the chase by myself and payed the price in the last 6 miles but it was worth the efforts and I would do it exactly the same again. Congrats to Brian Matter the local Midwest hero for the 3rd place finish and almost the repeat on the 3peat.... Triple Crown! 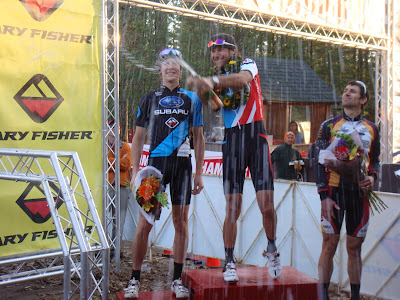 The rest of the weekend was spent relaxing and enjoying the company of new and old friends. The annual party downtown was crazy as usual including the party bus. Breakfast the next morning was the now tradition of The Omelet Shop, and amazing as always. Iceman is always one of my favorite race weekends of the season and I can't wait until next year. 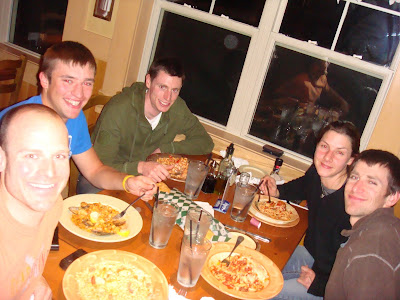