On the podium, finally! 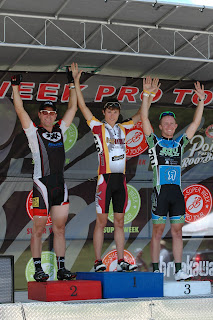 As things begin to wind down here at the ICC SuperWeek tour, things are just beginning to wind up for me. I've reserved myself a bit for these last few days and my points are starting to add up quickly in the overall standings.

This week started with the race in my last update, Whitnall Park, which was a very tiring day and start to the long week of racing. Tuesday was a road race again in Milwaukee, The Bucyrus Cycling Classic. It was a lap course, each lap containing two good power climbs high winds and good technical corners. I managed to get in a breakaway that packed some major horsepower, but sadly it didn't succeed. Three of the four of us in the breakaway were all in the top 10 overall and I'm sure the peloton sensed some urgency with us all out front. A few people escaped again and the sprint was for fifth or sixth place. I ended up eight in the sprint and settled into 8th place overall.

Wednesday was another road race, this time it was a bit longer compared to all previous days, we set out for 70 miles on a 4.5 mile course setting out for 16 laps. It was a super hot day and it was to be my longest road race ever and I was a bit nervous. I'm happy to say I felt extremely good despite having to pee for the last 2/3 of the race. Even though we were neutralized a few times I was a bit too shy to do my duty on the lakefront in Milwaukee. All minor dificulties aside, the race came down to a group sprint despite many breakaway attempts throughout the day. Bill tried to position me up the right side but as things closed up quick on that side I swung over to the left side and less than 300m from the finish a hole opened up and I took full advantage going from about 13-15th wheel to a podium finish in third place!

Thursday it was time to get back into crit racing mode. I felt like crap that morning. I had slept just fine, gotten a full 8 hours of sleep and even though I had done that I woke up feeling so tired I could've stayed at home and napped all day. Tony and I watched the tour to its finish that morning and seeing Schleck win must've motivated me a slight bit as I felt great as soon as we arrived in Racine for our race. Not to mention the fact that I had two teammates by my side for the day. Jesse and Bill were there and helped as much as possible to keep my in the top of the overall.

I didn't get much of a warm-up which made me slightly nervous at the line but once we got rolling on our 42 laps on the .8 mile course I started to feel great. Jesse and Bill were taking turns on the front trying to help catch a break that started very early in the day. All organization was out the window and 3 guys were up the road with between 10 and 15 laps to go. I made desperate attempts to close down the gap myself on the front and got it as close as 10 seconds but as I pulled off no one else could pull through as fast. With about 5-8 laps to go I decided to fall back and leave it to the rest of people at the front. With less than five laps I learned that Jesse had dropped and I hadn't seen Bill for a few laps. He came up to tell me the news about Jesse and he looked quite tired. I still felt rather fresh but I wanted to save it for the sprint. I couldn't close the gap to the break by myself and got into position for the last two laps. A move came on the second to last corner on the outside which I covered and got position on the inside of the last corner with two guys in front of me. I passed one and came in just behind the other for sixth place as there were 3 in the main break and one other rider went on the second to last lap.

My form really seems to be coming around, my power numbers have not been that impressive yet, however I know I am quite fatigued and expect things to swing back up for crit "nationals" in two weeks. With only two days left I am still very hungry for a victory, keep posted as I will be taking more risks to get in a winning break or make a winning move within the last few laps.
Posted by Unknown at 12:33 PM