Lance, you were wrong, it's all about the bike!

When I first got into cycling I read Lance Armstrong's book, It's not About the Bike, and learned a lot about life and what he meant by that title. At that same time I fell in love with biking, especially road biking. However I am here to tell you today that I have discovered a flaw in this claim by Mr. Armstrong, it's all about the bike!

You see, Lance Armstrong did not have access to SISU Cycles at the time of this claim, nor was it the dominating force of cycling that it is now. As we all know SISU Cycles has been a rising power in the bicycle industry since its start in the U.P. in August of 2006. If only Lance would've known about the expanding superpower of bicycles was happening right here in Michigan's Upper Peninsula. He stuck with his deal with Trek as any pro would for his comeback last year at the height of SISU's rise to power. Bad move Lance, you could have had some SISU in your life and won the tour last year. Such a shame... But third was good enough, right?

Unlike Mr. Lance Armstrong, I saw the hope in such a company and I wanted victory. After SISU offered to sponsor me for the 2010 and 2011 seasons I knew this was the right decision for me. Not only a great team, but a great bike. After an evening test ride with owner and team director, Matt Palomaki, I was sold. This bike, the SISU Cycles FF-1 (Flying Finn 1), was the bike for me.

What I found in the frame is a super stiff, very supple ride. The bike responded to every bit of input I gave it. I didn't get the chance to rail a corner, but that is first on my list once I take my new bike out for it's inaugural ride. I was so impressed that I started work right away that evening to pay for this new bike while also planning one of the sweetest custom builds in SISU Cycles history. 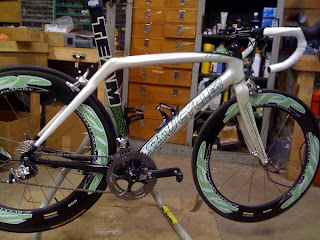 I met with Matt at 9am Thursday morning to work on my ZIPP decals for my 808 wheels what would add the aerodynamic edge to my new ride. That was my task while he built the bike up with SRAM Red components throughout as well as a ZIPP SLC2 handlebar, WCS stem, Selle Italia SLR saddle and white bar tape to top it all off! After a full day of building, peeling old decals off and replacing them with custom graphics from Signs Unlimited we ended up with a truly custom machine.

The initial test ride of the new bike immediately after the build felt very good. All the feelings I had on the very first test ride of Matt's bike were there. The difference was that it was mine, it had my name on it, my parts and I was ready to ride! The frame soaked up all the vibration that only roads like Greengarden road can provide and as stated before, was stiff as a board. I took it easy at first and built up to a moderate sprint followed by a short climbing test. I couldn't be any more pleased with the feel of the bike. I'm sure I'll have adjustments to make after my first real ride on Friday, but I'm very excited to have the bike and begin dialing it in. 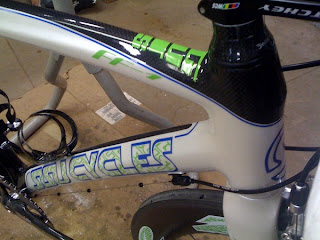 So back to the fact that Lance was wrong; it is ALL about the bike. As you can see from the picture above, this thing just looks fast and ready for success. Friday will be the true testament to this but I feel that this bike will bring me to a whole new level of racing simply because of its design and the fact that I got to make just about every decision about the bike along the way.

It's been a while now since the day over Spring Break when I first was offered this sponsorship and we started work on this project but I couldn't be happier now. This bike is off the chain! Soon to come will be the comparison between my 2008 Specialized Tarmac Expert vs. my new SISU Cycles FF-1.
Posted by Unknown at 9:42 PM