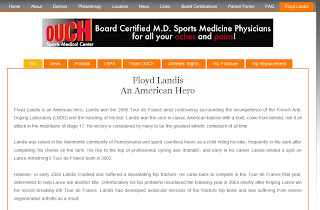 Well, the dust has settled after Floyd has admitted to using PEDs for most of his career and accused others of doing the same. I find myself sick to my stomach not because of the continued allegations made toward my most beloved sport of cycling, but because of the thought that there are people like Floyd Landis out there in the world taking advantage of good people who are trying to help those in need.
The page to the above is from the OUCH Team site and http://www.floydlandis.com/. I took a screen shot because I would bet dollars to donuts that it won't be up for long. They call Floyd Landis an American Hero and go on to say that many consider his 2006 TDF stage 17 victory to be the greatest athletic comeback of all time. Well, I would say that not many people would consider it any longer.

If you haven't already, please listen to the video (above) setup by Floyd to help raise money to fund his legal case. There are a few seconds of nothing at the beginning. Warning: If you have a weak stomach you may not want to listen to this. . . it caused me to vomit a little (like when you think you are going to burp but then surprise, and a little food comes up) when I saw it.

Here is a guy who cheated the sport to win the most coveted race in the world, denied he cheated, set up a fund to support his legal actions to fight the UCI, accepted between 1 and 2 million dollars of honest people's money, continued the legal fight for years, and then after everything played out . . . he says "oh and by the way, I doped and took PEDs for most of my career."

I can see doping and taking PEDs. Ok, so he felt like he couldn't do it on his own so he called the doping doc and sold his soul to the cycling devil. If he stopped there, served his two years, then attempted a comeback (like everyone else) it would be as shameful as all the cyclists who served a ban. But taking people's hard earned cash is going to far. Who does that? He must have no conscious . . . AT ALL!! What was he thinking to himself the day money started rolling in to help him fight his case? I can't even imagine someone being able to accept the money and then set up the "Floyd Fairness Fund"!!!!!!

He clearly has issues.

Posted by Matt Palomaki at 8:40 AM