Tom and Jesse raced in the Crystal Lake Classic in Rhinelander, WI this weekend, along with a whole slew of friends and acquaintances from the Ishpeming/Marquette area. Included in this list of who's who in local cycling lore are Dags, The Junttis, Treener, Margaret, Tami, Lori, Swampy, Kelly, dloy, and Amy. I'm sure I missed a few; my apologies to you. The UP was well represented by this group which had several top 5 finishes. Many of our friends from the Red Jackets also came out to race hard (most notably, Mark Klein took top honors in the 25-29 Comp group). Nice job YOOPERS!

The first mile or so of the 11 mile course (which Comp riders did 2 times) is gravel road and doubletrack that winds through a boyscout camp and then climbs a bit before descending into singletrack. From there on out its nearly all bumpy singletrack. The SISU boys went hard out of the gate and stayed near the front through the fast gravel section. Tom was the second man into the singletrack and Jesse was 5th.

Their age group started last this week, so they had to contend with about 150 racers already on the course in front of them. With so much singletrack, this meant lots of time waiting behind slower riders while looking for an opportunity to pass. Tom was able to hang on to second place through the traffic and jumped to first when the leader flatted. Jesse struggled with lap traffic and the pain that results from riding the bumpy stuff on a fully rigid steed. While Tom and Jesse agreed that suspension would have been preferred, the lack therof didn't keep Tom off the podium. He raced to a 1st place age group finish and 3rd overall. The only racers to beat him on the day started ahead of him and didn't have as much traffic to contend with. Once again, he was amazingly strong! Jesse came in 3rd in the age group and 16th overall.

Full results from the WORS Crystal Lake Classic can be found here. 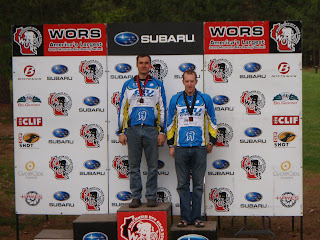