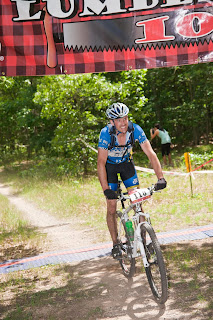 Racers often look at me strangely when I say the Lumberjack 100 is my favorite cycling event. Granted, I haven’t raced outside of the state of Michigan and I am relatively new to it all. Still, though the Big M course is, according to ninth place finisher Garth Prosser, a trail that a beginner could ride, at what other Michigan races can I line up with heavies like Eatough, reigning champ Jeff Schalk, and local heroes like Tanguy, Simonson, Musto, and Graham?

Anna and I finished loading up the diesel wagon and drove across town to pick up Cyclefit and Lonesomemountain.com rider Jeff Zimmerman. Jeff is more experienced with 100 milers than I am, having suffered through the mudfest the NUE season has been thus far, but this was his first LJ. We talked a lot about nutrition on the ride, as this, not the mileage, has been the real crux for me. How does one avoid “feeling bad” for a lap or part of a lap? This has been my question for a year since having a horrific second lap at the ’09 event. We were determined to have a good breakfast with pre-made (Chef Jeff) French Toast, eggs, and good coffee..

Pre-race business taken care of, we suited up and tried to warm up on the two mile paved stretch that would be the roll out. My goal was to be into the singletrack in the top twenty so that I could avoid first-lap traffic. I locked out the new Reba and the race was on; the pace on the pavement was faster than I remembered, probably due to a course change. In previous years, the start dumped riders onto singletrack, then smacked you in the face with a nasty, sandy hill. This year, we were headed straight onto singletrack and people wanted…to get there…first!

Despite my efforts, once in the singletrack I was still riding in traffic and every time I hit my brakes I grew impatient. At first I told myself the old “it’s a long race, relax,” but that lasted about five minutes before I stood on a few hills and made some aggressive passing moves to clear some space. I settled in with Joe Slonecki from the Farm Team (who I keep hassling for New Holland samples) and we pushed a comfortable pace until he simply rode away from me two-thirds of the way into the lap. Unlike most riders I saw, I stopped at the aid station for a bottle of Heed, hoping it would pay off later in the race. On the first lap, 33 miles, I had three bottles of Heed, five Endurolytes, and a bar. Back at the transition area, I slammed down a yogurt, some pedialyte, some water and tore off for lap 2 after Jeff rolled into our pit about a minute behind.

The Hogsback was absolutely flying on this bumpy course and the Crossmarks bit nicely on the laser fast cornering. Already, though, I could feel my saddle starting to chew into the skin under my sit bones, and I knew that I was in for some pain. I forgot to butter up at the next pit! I would pay for that for the next week every time I tried to sit down. Later in the race, I had to stand just to relieve the pain. Put this on the list of things to change next year. Saddle? Butter? Endurance pad? Check.

I left the pit already concerned that lap one took too much out of me, but I pushed on, trying to take care of salt and nutrition. About ten miles in, I started losing power, going backwards fast. I tried to stay positive as rider after rider passed, just hoping to make it to the aid station. The spirit of the aid workers definitely was a lift as they filled my bottle, pointed to food, and chatted about the race. Several were admiring my bike, asking about this Sisu thing (the word “beautiful” was implemented). I told the Matt Palomaki/Sisu Cycles story, abbreviated, between bites of PBJ and banana. Slightly revived but with better attitude, I rolled on, taking a mouthful of Heed every few minutes to keep a trickle of calories coming. I hit the dirt road section hard, ate some more, and then hit the last five miles feeling better than I had all lap. I walked some of the last hills, knowing I need to save my cramping-yes, cramping in the second lap-right hamstring some of the damage. I rolled into the pit with a slower second lap of 2:42. The second lap pit was faster than my first, armed as I now was with the knowledge that the aid station was not terribly far away. I didn’t feel great, but had a good feeling that I was recovering a bit for the third lap.

People debate about the mental strain of a 33 mile lap versus a 100 mile loop. I can’t really speak on that, given that LJ is my only 100 miler, but I will testify that ticking off each major hill for the last time of the race is, in itself, a major lift! Early in the third lap, a young guy rolled by. I looked/smelled/sounded so bad that he was concerned! I turned down his offer of a gel, didn’t need it, but thanks, and hope to see you later. Five miles into the last lap, I started to feel good, really good, and I started pulling people in, including gel guy. Guys who looked so strong 10, 20, 40 miles ago were completely shattered. Attitudes change this far in, and for the first time in hours, I felt like, well, the hunter rather than hunted, but how to keep that feeling going?

I rolled into the aid station and went again for PBJ, bananas, heed, and the real prize, two cups of cold Coca-Cola. Hurting, but amped-up and with 18 miles to go, I was determined to finish strong. I also had thoughts similar to single-speeder Wayne Cook (Frasier Bikes) who wailed, laughing “Why do I do this?” At this point, there was a lot of lapped traffic on the course; I loved the determination on the faces I saw. It was really inspiring to see these riders pouring their guts out, going way beyond their limits, writing their own LJ stories, and the emotion pushed me even deeper into my reserves.

When I hit the dirt roads late in the third lap, I felt someone on my wheel and hoped that he would come through for a pull. It was a masters rider, and he apologized that he couldn’t do work. Told him I would do the best I could. I ate another bar and put my head down, all thoughts of saving anything put to rest. It was all out until the finish. I pulled him for a few more minutes in the singletrack until I started to ride away. It was another emotional lift when he thanked me and urged me to ride strong; he probably helped me more than I him.

After the brutal hills and blistering bench-cuts of the last six miles, I got stuck behind a single-speeder who was just behind another geared rider. I stood and sprinted past the single, but had waited too long to gain another spot. I rolled through the finish chute 29th in a time of 8:05:54. I was disappointed to have lost spots (my goal was top 20) from my finish last year, but I still cut 50 minutes from last year’s time. Anna was there at the finish to help me get myself together. Jeff had some struggles on his second lap, but had a strong finish of 8:31. He’s now sitting top ten in the series standings and is planning to challenge Schalk for the title with a strong second half.

Thanks again to Matt Palomaki of Sisu Cycles for getting me some suspension and for building a really hot 29er! Thanks to Mike and Kay for the excellent lodging and Anna and Jeff for the great weekend. Great job Rick Plite and crew. It’s still my favorite race!
Sunday Anna, Jeff, and I did a thirty mile recovery ride on M-22 with a burger stop at the Blue Slipper in Onekamah. It was an utterly perfect blue sky day with minimal wind; even though the silver-dollar sized lesions on my butt were killing me, I had good company and world-class Great Lakes coast cycling.

P.S. Sorry about the lack of pictures--dead battery. Full results here: LJ results
Posted by Jtree at 11:44 AM