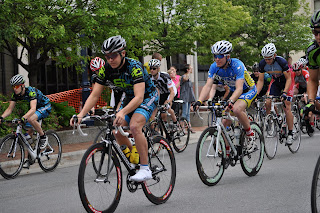 I went into this weekend with absolutely no expectations. This weekend's race in Mt. Pleasant isn't very high on my priority list, and with Superior Bike Fest and Tour of America's Dairyland coming up I didn't have any goals but to hang in there and test myself in the second half of each race. Saturday was a crit, a 60 minute torture fest in the blazing heat and Sunday was a road race in slightly cooler weather.

As I said it was slightly warm on Saturday and it's been pretty cool weather up north lately and we've been cursed with quite a bit of rain. This made for some chilly June riding and made for a pretty big shock to the system when I set out for the race. I managed to hang with the group throughout the race, take a few pulls, one big one and a couple small ones. I felt pretty crappy throughout the day and as I had no expectations I felt no need to hound down the lone breakaway from Priority Health that ended up winning the race. The rest of the group came in for a group sprint and I got caught behind a crash in the last corner leaving me in chase mode down the final stretch and putting me in at 18th place. I was happy to finish in the hot weather, especially given the length of the crit.

I woke up Sunday feeling pretty good, not too sore, just slightly fatigued. I walked down to get some ice for water before having breakfast and remember thinking to myself of how I lost this race last year and how I could win it this year. My training plan, though, was to take it easy for the first half and then test myself during the second half. I did just that, and without spoiling the result it all worked out well!
The whistle blew and we were off, we were in for a flat 46 journey. Less than 300m into the race, a guy from the Wolverine squad blasted off the front at over 30mph and the group began to chase as he TT'd away from us! We were off to a FAST start, after catching the single rider we all laid the hammer down and averaged 30+ mph for the first 10 miles, kept that average over 27 mph at the halfway point and after the race we had dropped to an avg. of 26ish. It was a fast day. Alexi Vermulen made many attempts to get off the front as it is one of his only chances of winning a race. In the second half of the race I made it my goal to cover his every move, getting in any break he launched or working to catch a break he was attempting to make.

I felt extremely strong while doing any work at the front and also when I got in the two biggest breaks that occurred over the course of the day. Sad thing was that once the breaks were established, no one wanted to do any work and they quickly fizzled out. The group was chasing hard all day. It felt good to get that experience and do some solid work, but coming into the last 10k I was getting pretty tired. Between seven and five kilometers to go I decided to get off the front and lay low for a bit. Alexi kept attacking as it was his only hope to get off the front in a break and win solo. The group still covered his every move and it came down to a sprint finish out of the last corner with 1km to go!

I was in great position coming out of the corner, we made it through without any crashes which was a relief and it was a straight shot to the finish. It was slightly downhill for the first 400m, flat over a set of railroad tracks then uphill for about 100-200m and perfectly flat for the last 200m. The tracks were really rough and I bunnyhopped over them smoothly but by now I was slightly boxed in. Luckily a gap opened up on the hill on the right side. I saw the opportunity, drafted off everyone up the hill and just as it flattened out I flew around the group seeing nothing but 200-300m of open road, the start/finish banner hanging over the road like a sandwich hung in front of a fat kids face. I was all alone and I was on my horse. I shifted up one last time, laying the hammer down, checking under my arms while in the drops in hopes that no one from the group behind me would come blazing by. I couldn't see anyone and finally I saw the pink line, the finish, I had done it! I crossed the line 2 or more bike lengths ahead of the group. I threw my hands in the air after the finish, pumped my fists and couldn't stop screaming, "YES, YES, YES!!!" 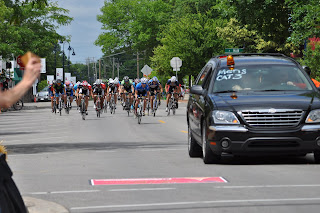 I was SO stoked to have my FIRST victory as a Cat 3. I gained even more confidence from this result. It was so much fun to go out without any expectations, have fun, test my body, do some work, and then come out and win it. After all that, it was so much more rewarding and I will cherish this victory for quite some time.

Here is the final pic, about 100 ft. from the finish leading them all in. 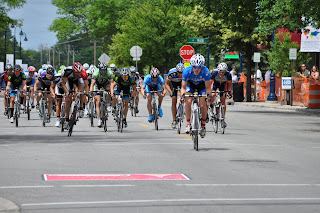 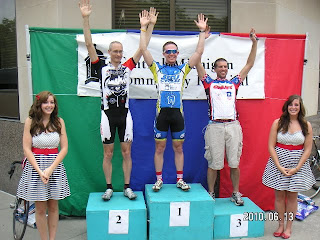 I'd like to thank Matt for the amazing bike he put together for me. It's really proving itself in the sprint which is an area it hasn't been fully proven before. The bike is AWESOME and I can't even count the number of compliments I got on it this weekend. I'd also like to thank Rudy Project for my sweet shades and Border Grill as our sponsor and my employer for being supportive and understanding of my busy race schedule and as always, thanks to Sarah who is always there cheering me on and as my trusty support crew.