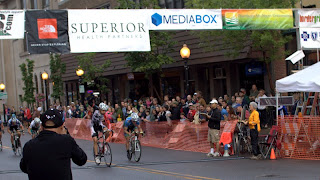 That's what was on my mind during this entire weekend during my most important mid-season race. This year's Superior Bike Fest saw the worst weather it's seen in most years of its existence. Every day brought a different weather challenge or surprise. It made planning and getting ready for races tough and racing even more tough.

Friday night at the Twilight Criterium I experience my very first crit on wet roads. I was pretty nervous going into the race and was almost late for the start because my computer time is 5-10 minutes off from other clocks. I had just barely finished my warm-up and took one or two quick laps of the new course, got my timing chip and lined up at the start/finish line. The whistle blew and we were off.

The roads were gross, water and sand being thrown up in your face isn't exactly a pleasant way to race but that's part of what our team is all about. GUTS! I launched a breakaway only a few laps into the race to mix things up, with no hopes of staying away but as a gap emerged I got some hope. Another person attempted a bridge and after sitting on his wheel to recover for a lap I got back on the front and let us drift b

ack to the pack. After that my legs were slightly tired, it was a good shock to the system and I felt ready and relaxed, extremely focused on my goal: another sprint victory. I sat in while Jesse sat on the front chasing down every breakaway that went off the front. He crushed everyone's dreams that tried to get off the front, he said he felt "superhuman" throughout the race. After all his hard work I positioned myself for a sprint to start on Front Street and someone attacked just before I had planned and I jumped with them. I came around the final corner in 4th or 5th and worked my way all the way to a solid second place. It was so close, as you can see in the photo above. This was a great start to my ultimate goal for the weekend: a podium finish in the omnium.

Saturday was a totally different story about domination. The road race was dominated by a nine man squad from Hagerty after breaks were launched as we went through Gwinn. The break contained a person from every team but SISU. I was sitting in and recovering from trying to chase the initial break and was doing the same thing just before the gap was bridged by every other team not represented. The break crushed some of my aspirations for a well executed uphill sprint finish. Weather left me tired, disoriented, and discouraged. Hagerty managed to block the group for over 30 miles to allow the break to finish six minutes ahead of us. I had perfect positioning though coming into the finish to sprint from 200m out until somone went at 300m to go. Since I didn't get in the break I really wanted the field win, but the person that took it was flying when they went by me and there was no hope. My legs blew up, cramping with only about 50m to go as a good chunk of the field cruised by. I had nothing left. I knew I had given that day my whole effort, I wasn't overly pleased with my result but in retrospect I know Jesse and I both did a ton of work on the front in hopes of getting closer to the break. I was a tired boy after the long day in the saddle.

Saturday night was fun, I got to hang out with the team: Palo, Justin Koski, Josh McCreedy, Jesse Bell. We went to L'Attitude for dinner and ended up staying and talking about racing and life. I had a lot of fun. It was great to meet Justin and Josh for the first time, you both need road bikes though! After we decided to bounce from L'Attitude, Jesse had raved about the Wild Rover's Chicken Pot Pie, so Jesse, Josh and myself all headed up to the Rover for a second dinner just before they stopped serving. All three of us smashed our own large pot pie which usually takes two people to eat. It was awesome, we hung out and shared more racing and life stories including my own story of how I got into cycling.

For the second night in a row I stayed up late cleaning my bike from the nasty conditions over the weekend. My powertap had also quit sending data but after a battery replacement at midnight it was back to normal for the race in the morning.

Both Jesse and I woke up SUPER early for our race that we thought was at 9am, come to find out it was at 11:25. So after I woke up at 6:30 and double checked the times I went back to sleep for a good 1.5-2 hours. The first time I woke up I felt sick and exhausted but after the second time I felt refreshed and ready for the day. Sunday was a circuit race around Presque Isle in Marquette. This is about a 2 mile lap done in reverse from the direction of normal traffic flow, going up a good steep power climb followed by a long fast downhill to a sharp right hand 90 degree turn that's narrower than the one lane road around the rest of the island.

Jesse was a beast another day in a row for me again. He controlled the race for us, chasing breaks and setting the past for about 70% of the entire race. I simply sat in waiting for the last lap with the fast downhill before the finishing straights. I was about 6th wheel in the sharp 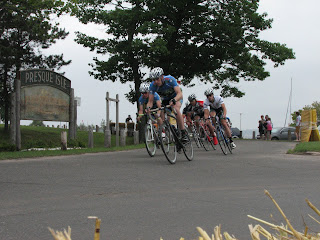 corner which was followed by a flat then another right hand corner, another straight and another corner then the finishing straight which was pretty short. I made up one position before the final corner and just edged out 5th place with a stretching finish bike reach for a fourth place.

I owe much of my success to my teammate Jesse, without you this weekend would have a completely different story. You saved my butt on more than just a couple occasions. My strength is not the individual pursuit and to have a teammate as strong as you is very valuable in races such as this weekend where everyone is out to beat the home teams. Jesse asked me after every race if there was anything I wish he would've done differently and he had done everything I asked of him and we got very close to the results we wanted for the weekend. I couldn't have asked of any more from just him.

I had a great weekend, a second and a fourth gave me some good cash prizes and some valuable upgrade points. I ended up fourth in the omnium for the weekend, just out of a podium spot which was one of my goals but after the events of Saturday it was almost impossible without a guaranteed win on Sunday and others that were strong doing really bad. I'm very happy with my form, my sprint power numbers are continuing to climb. It's exciting to look at the computer and see a new, higher number and be able to say "yup, today was a good day!" I learned a lot about my strengths and weaknesses and I'm still analyzing power data to see what I could have done differently.

It's now time for a hard week of training and preparation for heading off to SuperWeek in IL/WI where I will be doing 11 race days over the course of two weeks. Stay posted as there will be possible training updates between now and then as well as continuous updates throughout the SuperWeek tour.

Thanks again to my team, Matt, all of our sponsors, and all of you who came out to support me over the course of the weekend. All you've done for me means the world to me and I'm enjoying this year of cycling more than any others in the past!
Posted by Unknown at 8:00 AM