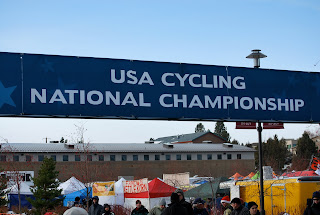 I flew into Bend, Oregon with cycling rival and team Chocolay Ace Hardware all-rounder, Dave Grant, for a cardiovascularly challenging week of cross country skiing and cyclocrossing. After 3 days of ski camp, I took a recovery day before the cyclocross nationals race. The weather was frigid all week; the below-zero snow temps made for extremely slow, challenging skiing. With daytime temps in the 20's and low 30's, we anticipated a very slippery cyclocross course.

On Friday afternoon I suited up for a pre-ride of the course. In warm weather, it would have been a fast track with many flat sections and limited climbing. However, the weather was ideal for creating ice and after 2 days of racing everything was packed down into a slick, rock-hard surface. Even the grassy sections that were not covered in snow were extremely treacherous. Bone crushing crashes through these off-camber ice rinks were clearly foreshadowed.

There were only two true dismounts on the course: a double set of barriers and a set of stairs with about 30 steps. Several tight turns, a few of them 180 degrees, would slow down the pace and require powerful accelerations to stay with a group. It seemed that such accelerations would not be possible due to the unusually low coefficient of static friction between rubber and ice. Felling lucky to have kept the bike upright for three laps, I terminated my pre-ride and rode for a short time on asphalt.

Dave and Tony Lackey (who joined us on day 2) raced at 9:30 am on Saturday. The conditions were almost exactly the same as what I had experienced during my pre-ride. The Ace boys got terrible call-ups behind more than 100 other Masters 40-44 racers. They both kept the rubber down as they avoided the start line pileup that broke at least one collarbone. I watched in awe as crash after crash after crash brought racers to the ground. The course was a veritable ice rink. Dave and Tony stayed mostly on their bikes and essentially held their starting positions. They finished about as well as you'd expect from a couple of Ace chumps, 110th and 136th place. The winner of their race completed 6 laps, Dave and Tony were pulled before they completed 5. Deprecation aside, they did well to escape the race without any major injuries (bruised ego excluded).

My race, Masters 30-34, was scheduled for 3:30 pm. By then the temps were in the low 40's and the sun had worked its magic on the ice rink, turning it into a wet, sloppy mess. I was called-up about 50th position behind all the Category 1 and 2 and many Category 3 racers. All of the 4's were behind me. The gun sounded and the fun began. I came to a complete stop at the first turn as the group slowed in front of me. At the next straight stretch, I accelerated as hard as I could and got off the beaten path to pass about 15 guys. From there I just dug in and tried to hold my position. 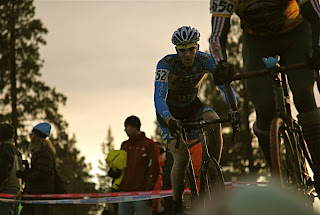 Photo by Lucian Jones
The course was very much unlike what I had ridden the previous day. My Michelin Mud tires hooked up perfectly and only rarely did I lose traction. The pace picked up as the riders stretched out over the course and traffic became less of an issue. Instead, braking was my biggest challenge. I did poor job of setting up my brakes after disassembling and reassembling the bike for the trip to Oregon. The slow-mo pre-ride didn't reveal the issue, so it wasn't until I was racing that I realized that I'd have to drag a toe Flinstones-style to make it through some fast downhill corners. 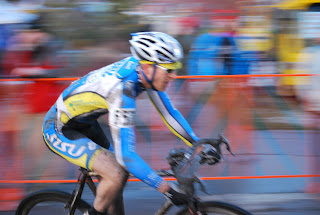 Photo by Lucian Jones
I occasionally heard people yelling out positions and could tell I was somewhere around 30th place. Finishing in the top 30 seemed like a reasonable goal, so I tried to pick off a few guys here and there and avoided getting passed. I was yo-yoing with a guy until the end of the last lap when he spun out in front of me while going up a mud hill. I was pretty sure that move guaranteed me a top 30, but wasn't sure until I saw the results that evening. 25th. Nice. I was muddy. 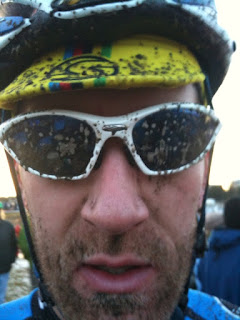 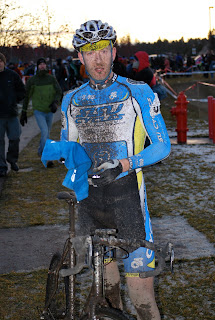 This marks the end of my 2009 cycling season. Its been quite an adventure and I'm looking forward to a minimum 30 day bike hiatus. Time to ski! Thanks to Matt Palomaki/SISU Cycles for all the support and to the team for a successful road season. Special thanks also to Lucian and Sarah Jones for providing an amazing room and board hook-up in Bend(and phenomenal photos, and a vehicle to drive, and anything else we could have needed). You guys were truly amazing! Thanks also to Henry for the exceptional cheering and motivation.

Henry, a cheering monster
Photo by Lucian Jones
Check back in January/February to hear about how badly DG gets whooped in the Noque. Also, if for some reason you want to see pictures of Dave and Tony, or a shot of me with Miss Alaska teen, check out the photo album for the trip here. All of the good shots were taken by Lucian -- Dave, Tony and I took the rest.
Posted by Jesse Bell at 12:33 PM 2 comments:

Jingle Cross Day 1- Under the Lights 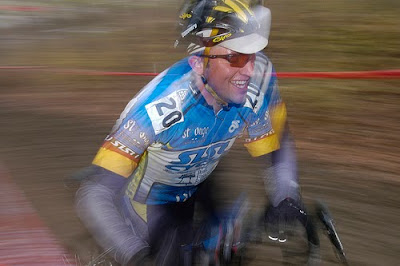 Friday night was my first ever cross race at night under lights and it was awesome! I was pretty pumped and for some reason found myself with a jitter or two before the start. The venue had giant spot lights brought in that did a great job of lighting the course as bright as day where it was shinning. A few spots were hard to see which made for some interesting racing to go along with the slip and slide mud covering the course. As usual Mt. Krumpet was a brutally long and steep run up to keep things interesting. 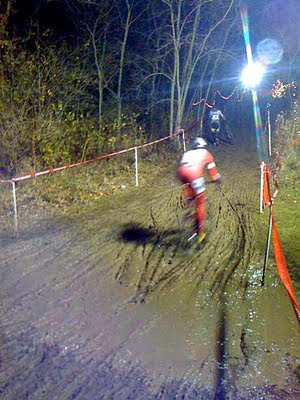 Telling your body its going to race at 7:30 at night in the dark through the mud and cold is not too easy. It helped to see the carnage from the previous races with countless derailleurs being ripped off and bikes hiding under layers of mud to get the blood flowing and adrenaline pumping. I can't explain it but I absolutely love and live for racing in nasty slick mud! The number of starters was in the upper 40's and looked to be some respectable competition. I decided to try something different and started a little easier to see if I could hang with a bigger group through the whole race. This proved to work a little better and I was sitting in with a group all th
e way to the bottom of Mt. Krumpet. Dialing tire pressure was a problem again with sections of hard fast pavement and slow slick mud. After a bike change things were going a lot faster again and I was able to catch back on and pass a couple dudes. All said and done I finished 25th and in the money! 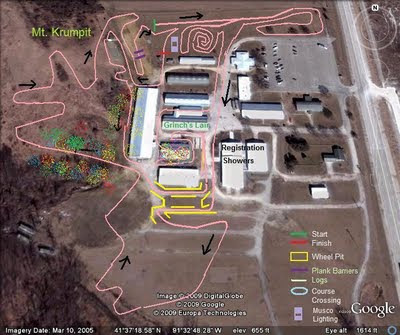 If you ever get the chance come do the Jingle Cross Rock weekend of racing! It's always held at a great venue with steller courses that change daily. A really well run weekend with fun to be had by all as a racer or spectator.
Posted by Street-Player at 8:49 AM No comments: