'Twas a sunny afternoon in Houghton County when all the cyclists got an itch to do what they do best. After a long day on campus I set out for my daily fix. No I'm not talking about drugs here, I'm talking about my bike ride! The sun had gotten to my head and I knew today was the perfect day for my first long day in the saddle.

I had set out for an adventure much like today's just over two weeks ago. It was a pretty nice sunny day, but definitely not as warm. I headed North toward Lake Linden and then to Calumet, back down 203 (the road by McClain State Park) and back into Houghton. By the time I got to Lake Linden and started up the hill toward Calumet it was all over. I cracked within the first 200 meters of climbing and if you don't know, it's all uphill to Calumet. Long story short, it was probably the longest 40 miles I had ever logged. It was pathetic and I felt totally out of shape.

Today I went in the opposite direction, South. I headed for a little po-dunk town called Pelkie, just about 5 miles west of Baraga. I chose the back roads that I have become familiar with lately as a route which would take me almost directly South to my goal. I set out for what would be 2-2.5 hours in the saddle and was greeted rather rudely by a stubborn SSE headwind. I bucked that wind for an hour and 15 minutes and god was it rough. There were times I couldn't hold 15 mph on downhill false-flats. Needless to say it felt pathetic, but when 1:15 rolled around I took a short break to gulp down about 4tbsp of peanut-butter and some water. I turned around, I did an out and back, and was very pleasantly surprised by the same headwind that had been kicking my ass the whole way out, was now acting like a jet back pushing me from behind. I was holding 30mph on a false-flat, uphill and hovering around 200 Watts. I was ecstatic! The first four or five miles were effortless, then I hit a wall... roughly 20 miles from home I was slamming water, gatorade, and in the course of those last 20 miles I ate two GU's and my output was dropping the whole way home. Almost. Lets just say I had a strong finish. There's a nice downhill right from Dodgeville to Sharon Ave. right by Family Video. I flew into town at just under 45 mph almost got thrown off my bike by a blind bump that I often forget about and came to a screeching halt at the 4-way stop. My house is a couple blocks from there so I took it pretty easy, hitting 35 on the city street coasting home. I was pleased with my overall strength through the ride and thankful to be in the comfort of my own home again!

It was a pretty horrifying ride in my mind, I had thoughts of going hypoglycemic and I've done that before and I didn't want to do it again. That's scary stuff... Not so scary stuff is finding out that your new SISU FF-1 just got dropped off at the painter's today! I think that's what kept me going all afternoon!

Time to go eat some dinner, this is the point where I wish Houghton had some good old Border Grill! I Guess I'll just have to suffer as a poor college student with whatever is in the fridge.
Posted by Unknown at 3:10 PM No comments:

My 2010 race season starts this Saturday in Middleville, Michigan at the second annual Barry-Roubaix (http://www.barry-roubaix.com/). My main memories from last year, other than proposing to Anna on the North Country Trail after the race, 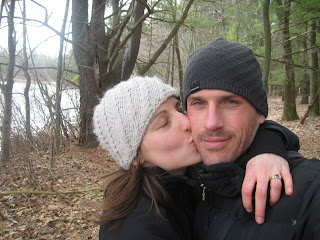 are of getting dropped on the hills, and downhills for that matter, due to my underwhelming fitness and competence turning over the gears on my 1x9 Empella Bonfire. This year I'll have my fresh Hogsback and the tires I stripped off my cheapo winter purchase: the Bulldogs are a bit more bite and a bit less roll than I want for this race, but I'm rolling what I have. Check it out: 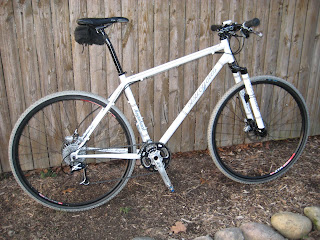 Kisscross puts on great events, this one and the Lumberjack 100 in Manistee being two of the favorites on my schedule. But it's the oaks and hills of Yankee Springs State Recreation, not just great promoting, that makes Barry-Roubaix, and the Yankee Springs Time Trial (an MMBA CPS and Chapter Benefit Race) really special races. Throw in quiet campgrounds, camp fires and Grand Rapids' breweries and eateries, and you have quintessential Michigan moutain bike racing. Here's another angle: 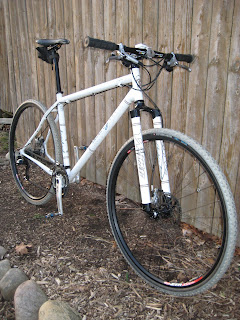 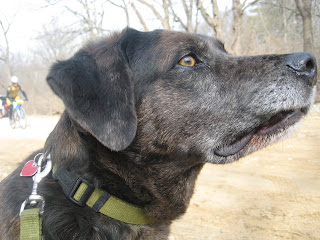 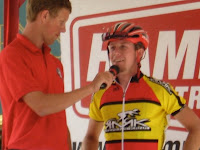 Chris Lynch, most recently riding for Kitchi-Mi-Kana Cycling Club, has joined the SISU Cycles Race Team for 2010, bringing the SISU roster up to 5 riders.

Team manager Matt Palomaki said Lynch adds some sprint speed to the team, which already is known for its technical descending and unusual strategic moves. SISU has been looking for a smaller rider to fill the massive draft created by 6'4" teammate Jesse Bell.

“Chris is a proven performer and will be a great asset for SISU,” Palomaki said. “He definitely brings another dimension for the team to utilize. In the final kilometers of races, he will be a key rider, whether setting up another team member or utilizing his own fast sprint.”

Having been courted by several top domestic pro teams, Lynch opted to ride for SISU, mainly so that he stay close to home and continue to ride Cat 3. We caught up with Lynch enjoying a Chicken Grande burrito at Border Grill in Negaunee, “You know, I couldn’t be happier. I’m eating my favorite burrito at my favorite restaurant in my favorite town and getting some solid base miles right here in the UP. I’m really looking forward to riding for SISU. The only thing better than my new teammates is my new bike.”

Lynch, a native of Negaunee, Michigan, joins the Michigan-based team where he started his amateur career in 2007. At that time, teammate Bill Street was still in diapers.