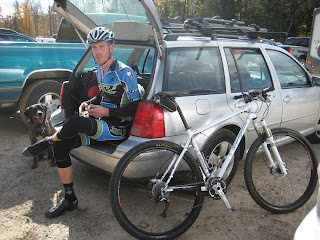 This is me savoring the pre-race routines (and, coincidentally, tightening a shoe-more to come on that). Peak to Peak, a premium fall race held at Crystal Mountain Resort, was a surprise treat. After three weeks of well, very, trying times, Anna and I packed up for a weekend getaway to Manistee. She was kind enough to encourage me to do the race, sensing that if I didn't blow off some steam, I was bound to punch through drywall or something equally foolish.
With a 12:35 start, we slept late, had a gallon of nail floater coffee, the first of our own eggs scrambled, and some leftover sandwich. We pulled into the lot an hour and a half early (!) to pick up the packet. Farmers were setting up for market while other set up a petting zoo, pumpkin carving exhibit, and more wholesome things! Really, what an amazing venue for families! The resort also ran the lifts for free, so spectators lined the brutal climb up the back of these hills. 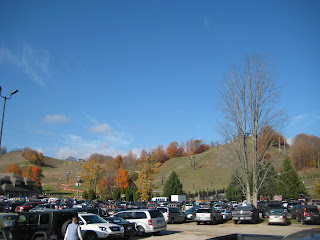 Most of the course was fast, swooping curves through the forest with occasional windy, windy double-track. Group tactics were a factor as gaps opened and closed while riders pulled through to keep the pace high. Then, near the end of the 11.5 mile lap, a few hills appear from nowhere, a painful finish to each lap. First, you hit some smaller gradual undulations, then a steep, sandy step up, then some more bench-cut singletrack before a dropped to the base of the ski hill behind the above picture. The first steep, sandy step and this ski hill beast really decide the race.
With so much time, I had a seven mile warmer on 115. I was going to debut my skinsuit, but was clad with arm and knee warmers for the ride. The wind whipped oak leaves everywhere, and my mind was clearing in the cold air. I didn't know what my body would do after six days off the bike, but the atmosphere of the day had me feeling really positive. 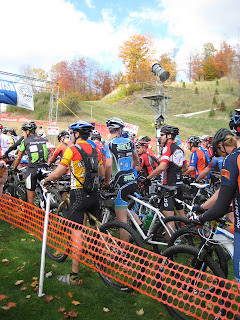 The start was a confusing mess, with the Expert 40-49s all over the start line in front of the young experts and my 25 deep 30-39 class. Whatever the case, it was quickly sorted out on the uphill start. I let ten or so guys sprint away and settled in, working hard, but not too painful. I wasn't feeling smooth on the sweeping corners, but as gaps opened up, I knew I needed to bridge. At a couple points, I called to guys to let me take a pull. A few stayed and some dropped as I caught and passed groups and felt better by the minute.
My legs were definitely shocked by the finish climbs on lap one. I knew before the race that hills, and the missing torque right now, were going to be a weakness. It hurt, but I just tried to spin smooth circles and keep breathing. I knew this hill was going to break me, or maybe it was mental weakness.
Lap two was quiet and there seemed to be much less traffic in front of me. The really fast single-speeders were gone and it was just a few expert guys, and most of the pro men's field, in front of me. It was quiet as riders leaned and swooped and battled the wind. Finally, at the end of lap two, I caught the group I would end with. There was a Fisher 29er Elite rider, surprisingly, and Rochester Bike Shop endurance ace Adam Naish. After we realized we were in the same class and out front, we agreed to work together on the third lap, as we knew the final hills would decide, not the singletrack or double track, combined with the group tactics.
Disaster struck on the laser-fast singletrack after the ski hill climb. My drive-side foot unclipped and I somehow tore the buckle strap base with my big ring. The large flap of shoe began to catch the crank on every turn and I had to turn my right heel out to avoid the annoyance.
Still, the hills were much smoother on the second lap and I got a great bottle feed from Anna at the start/finish. I began to think about winning the race. It was unlikely that I would be able to outclimb Naish, who has a season of NUE 100 milers under his belt. He and I could trade pulls to on the third lap, but at some point, I hoped to put him under pressure enough to get away. I tried, but twinging quads limited me severely. Nope, he was smooth enough to stay with me and I flat didn't have the guns.
We stayed together and were joined by a Hagerty rider just before passing a Bissell one. Then came the steep up. My shoe was catching and I got only a few feet up before both hamstrings seized. Hitting the ground quickly and moving, I was passed by all three in the groups; however, the ski hill was yet to come. As black spots formed, I got by the Bissell rider, but the other two rode away, leaving me third. 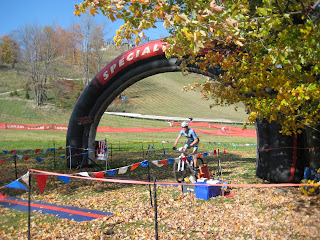 It was my third third-place of the season and one of the highlights of my year. 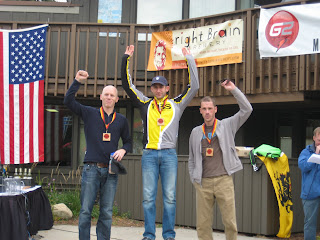 Iceman is next. I'm going back to the White Brother's carbon for it. It's been a great season for riding the Hogsback (all over the place). 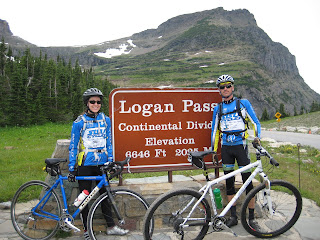