READY FOR THE SPRING CLASSICS!!!!!! 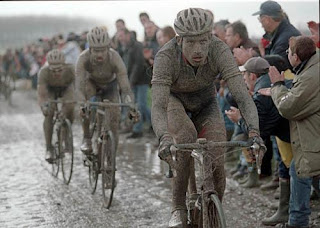 Paris-Nice is finally here. Watching the week long epic in March has got me itching for the the spring classics to come. In my book, the classics and France's famed tour run a close 1,2. The order depends on what time of year I'm asked. In the spring, all I want to do is get out and start the cycling season but, up here, old man winter usually still has a stranglehold on things. The excitement of a new season is looming and this year's off season doping allegations are now being enforced. By the time the Tour starts, its July and the early season buzz has usually worn off. But then again, its the Tour. So, which is number one? I've come to the conclusion that ultimately it doesn't matter.
Now, its time to start counting the days until Milan-San Remo, then Flanders, Basque, Sarthe and Paris-Roubaix. For now, I'll have to settle on loading up a classics course on my Tacx trainer and hopefully loose ten pounds from sweating profusely while riding indoors.
Posted by Matt Palomaki at 8:22 AM