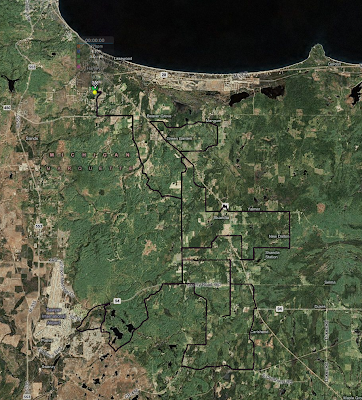 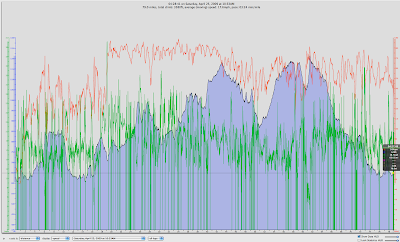 Yesterday's weather forecast had all the racers prepared for absolutely miserable conditions. It wasn't unusual to see racers geared up with double booties, waterproof ski pants and balaclavas. The thermometer was hovering around 34 degrees. There was a light rain falling as we began the 17 mile rollout, but the wind wasn't gusting at 24 mph as the forecast indicated. The first 17 miles were an uneventful tour. There was no preem sprint up Green Garden Hill, instead the group stopped at the top to take a nature break as the rain subsided and gave way to warmer temps.

As the course turned off of US 41, the race was on and the attacks by Chocolay Ace immediately began. Tom Mahaney went first. He got a short ways up the road and Derek Anderson tried to bridge. Jesse grabbed his wheel, knowing that Anderson could potentially stay away all day. Anderson and Bell continued past Mahaney and got a good gap on the field. Bell soon realized that Anderson didn't want this break to go anywhere and wasn't going to do any work. The two sat up until they were bridged by Anderson's teammate Andy Langlois. With better numbers in the group, Team Ace decided they'd give the break a go.

Bell, Anderson and Langlois worked fairly well together for about 10 miles until they were joined by two more Ace guys, Dave Grant and Matt Colligan. At this point Ace began attacking Jesse relentlessly. Jesse's competitive spirit kept him responding and riding hard with the group despite the fact that he had absolutely no chance in a breakaway with four guys on the same team. Anderson and Langlois eventually got off the front until Langlois and Grant flatted. Bell tried to close the gap on Anderson with Colligan in tow, but didn't have the legs. He eventually sat up as Juntti and Pernsteiner came by taking Grant and Colligan with them.

Bell dropped back to the pack where he rejoined teammates Lerlie and Carpenter. The group stayed together until Sporley Lake Hill when Langlois, Schmidt (Red Jacket) and Bell got off the front. They rode together the remainder of the race back to the Cycling Haus. Carpenter finished with the main group and Lerlie and Hill were close behind.

Wes, Grant and Colligan sprinted out the finish for 1, 2, 3 with Pernsteiner earning the victory. Anderson made a wrong turn and came in soon after his three teammates. The post-race feast supplied by race hosts Tom and Mary Mahaney refeuled even the hardest bonked racers.

The post race buzz centered on the gorgeous podium girl Mahaney recruited to kiss the winner and spray the champagne. 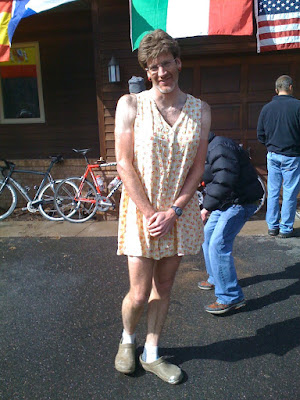