Day 1
As you read from the earlier post, this weekend was offiically are first training camp. We didn't have everyone one around because of schedules but the ones that were around were dissapointingly split up into two different groups. One group (Matt and Jesse) headed south to Iron Mountain and a few of us (Tyler, Glen, Tom) elected to stay around the area. Regardless of the split both groups had some great rides. Saturday we started at 10 a.m. with hopes of getting 3-4 hours of riding in and because the weather was so good we ended up doing 65 miles in 4.5 hours. The sun never stopped shining and our racoon eyes are true proof to that. Saturday was more of just miles on the legs, we worked on pace lining a few different times until we felt we were in sync. It came along well and was needed to get us use to working for each other. After a few efforts of pulling we all commented on how good our legs felt after 4 hours and contributed it to all the early March rides we had been getting in. We are all true believers of the early season easy rides, sure makes riding fun too. It sure feels good to feel and know the endurance is building. The legs felt even better after I gave the guys a tutorial on how to effectivly stretch your quads out without getting off the bike and keeping both hands on the bars, Glen and Tom are now sending me royalty money for this. It was fun to teach, they were like 2 kids in a candy store and all the candy was free!

Day 2
Although not as nice on Sunday we followed our 4.5 hour ride with a 40 something mile 3.5 hour effort. Stacking back to back days of 3.5 hour efforts is really going to pay off. Surprisingly the legs felt great and we even had to pull in the reins on Glen because he felt so good in the first 5 miles. Don't let age fool you on this guy, he's ready to GO! The wind wasn't as favorable on Sunday as we hit 20-25 mph gusts going up 94 and 41 so we took our turns pulling, which was nice for our team work. As the second day came to an end we had reflected on how much we just accomplished in two days. We had some great conversations about the racing, riding, and training. Bottom line, you can never predict how a race is going to go, riding with the Sisu guys for 4 hours on a weekend is a lot of fun and where we want to be, and Dominac and Tyler J. know what their talking about when it comes to training. Oh yeah and we really dislike Danny for calling Glen and rubbing in that he is riding in 80 degree weather. Or maybe it was a bit of jealousy than dislike. One more thing, Tim get married already so you can ride with us!

omy but the roads were awesomely smooth with great views of the country side. 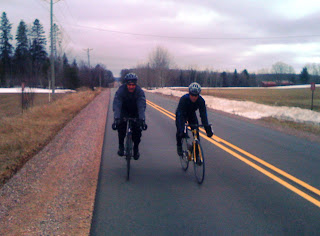 Posted by Culvers Racing at 8:29 AM