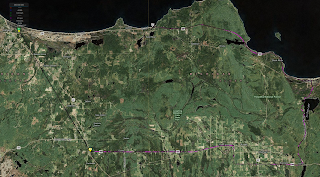 Yesterday I met up with several guys from Chocolay Ace and KMK Cycling: Tom M, Derek A, Matt C, Dave G, Wes P, Karl Z and Mike D. The afternoon started off on the wrong foot when Derek backed his truck into his bike, trashing the carbon fork. He had to resort to the CX bike for the long ride ahead.

The skies were clear, the sun was shining and the wind was blowing out of the N/NE. We headed south on 41. Capitalizing on a pit stop soon after the turn East on 94, Wes and Dave attacked catching the bunch completely off guard. After a few minutes, the six of us remaining organized a chase and tried to catch them, but we gained time very, very slowly...and we were hurting. Either they're really strong or we arent'. Hmmm. We finally came together around Dixon, but only because Wes and Dave sat up. They could have stayed away much longer. We cruised the rest of the way to Au Train and took it fairly easy up M28, with the exception of one weak attack on Shelter Bay Hill.

I flatted just before Sand River and Derek and Wes were kind enough to hang around assist with the tire change. Just a few minutes after getting moving again, I blew a spoke which renderd my bike unrideable. Derek and Wes headed up the road to get a car to pick me up, but I was lucky enough to be picked up by a passerby (thanks Amy!). I rode 59 miles, in just over 3 hours. I think the rest of the group got in 69 miles in about 3:30.
Posted by Jesse Bell at 8:41 AM